Markmakers Artists are a successful North West collective who are delighted to present their largest exhibition of work to date; Water Marks.

They’ve widely researched the museum site, its location and connection to the wider world, the collections and Waterways Archive – all this has pricked these artists curiosity, resulting in works that respond in curiously intriguing ways using a wide range of media and engaging approaches. Come and see what you think!

Water Marks is on display until 3 November. Entry to the exhibition is included in your admission price which will allow you access to the museum for 12 months. 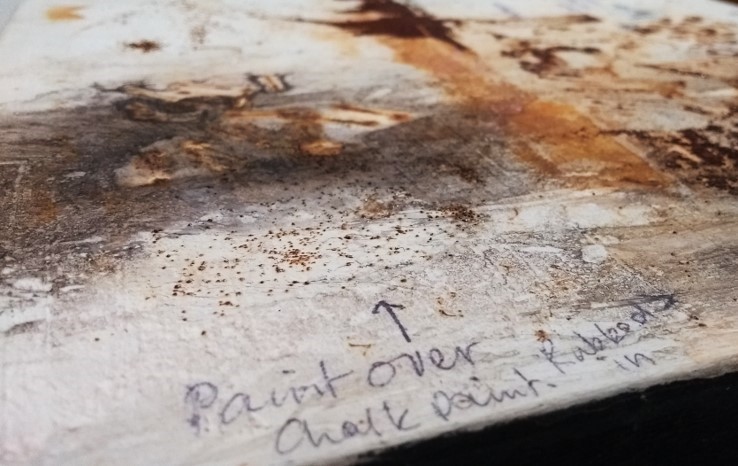 Markmakers were pleased to accept an invite to create this display at Norton Priory. The spaces available are intimate in nature so the brief to each group member was “create work which is bijou and inspired by the word, Focus”.

After a visit to the Priory several of the artists created work in response to its exhibits and spaces. Artists often relish the opportunity to create work which is site specific, responding to the place and the things found in it. Artists showing in “Focus” have been inspired by everything from the hum-drum of a sewage drain to meditative writings and carvings. Through artists' work there can be a new focus to the overlooked or the obscure. Whilst visiting the rest of the Priory you may spot some of the objects, ideas and places which inspired the work. 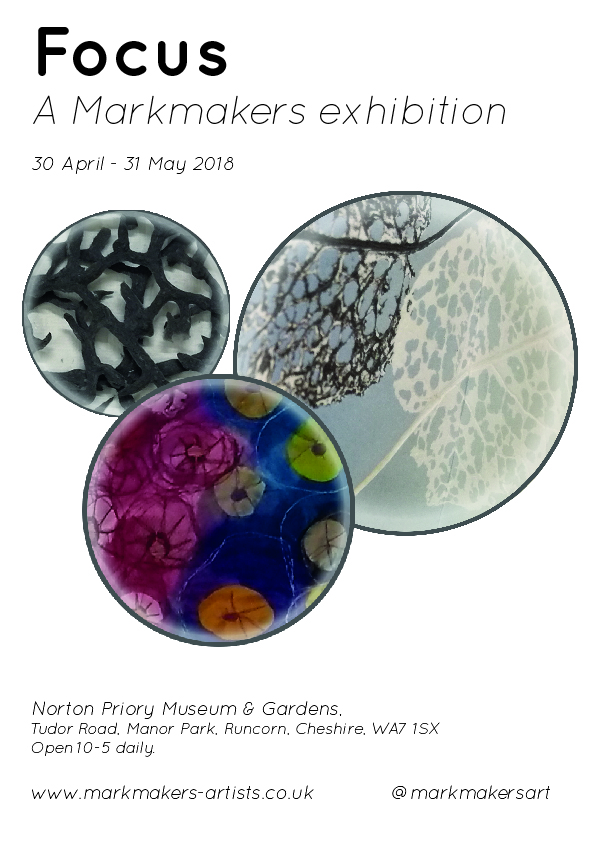 What is an interval?
Is it just blank space?
Is there anything of interest in the gaps?

The latest exhibition by Markmakers invites you take an interval. Step inside the punctuated, whitewashed walls of the gallery and consider self imposed breaks in life. Explore concepts of time. Sit, stand, look or listen.

Have a break, visit interval. 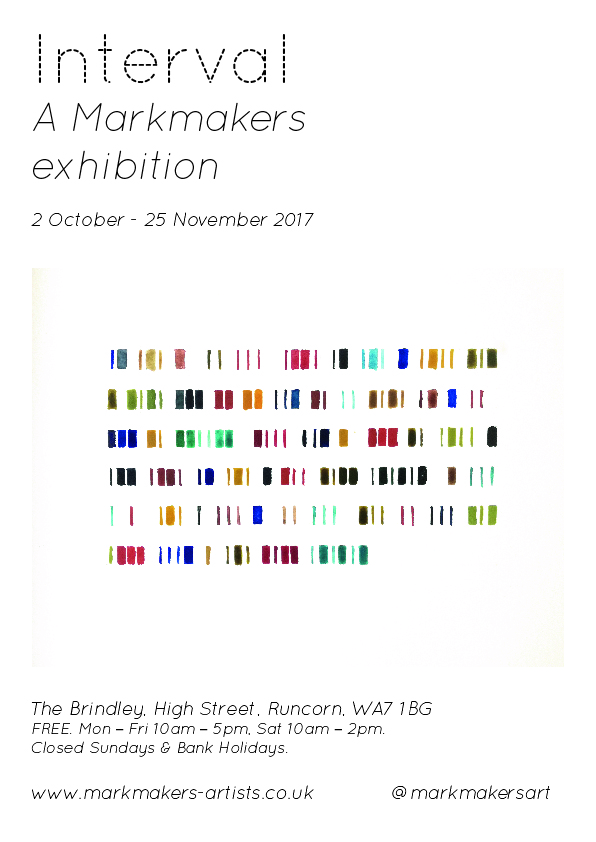 Borders between and Landmarks within:
Real and Imagined | Obvious and Ambiguous | Descriptive and Surreal

Landmarks & Boundaries is the latest project from Markmakers; Halton's contemporary art collective, and is inspired by the artists' geographical location of living near to the coastlines of North West England and Wales, and their individual experiences, knowledge of tides, islands, pathways, histories, folklore and rites of passage.

Crossings at high tide, clothes as signifiers of personal boundaries, migration and the experience of moving through the physical landscape are among the subjects explored with media ranging widely from paint and print to sculpture, textiles and installation. 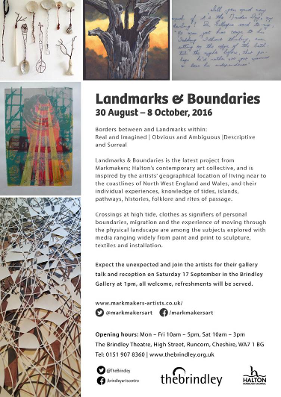 Landmarks and Boundaries is a project inspired by the artists geographical location of living near to the coastline of North West England, and their individual experiences, knowledge of tides, islands, pathways, landmark buildings, histories and folklore of this area. With planned group walks throughout 2015, nights spent away on rural sites, the artists will explore and further research what Landmarks and Boundaries means to them individually, including some collaborate interventions and facilitated projects. The responsive works will be presented in different mediums, including painting, collage, sculpture, textiles and print-works, and exhibited in various locations in 2015-2016 as a touring exhibition to inspire and inform. 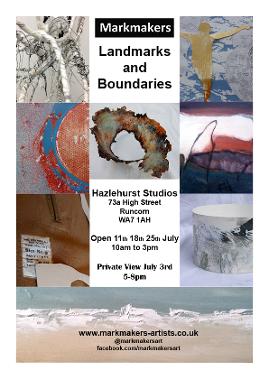 Curiosity is a state in which artists find themselves much of the time. The creative mind seeks out ideas to engage with almost daily. The spirit of enquiry in which this exhibition was begun is quite typical of this process and when the Markmakers group was invited to explore the ethnography collection at Warrington Museum, with a view to creating new work in response to the objects, a sense of anticipation and excitement was palpable.

The particular nature of the display at Warrington and its links to the earliest format of museums or Wunderkammers in Renaissance Europe, led the artists to explore the theme of cabinets of curiosity and they have spent many evenings in the galleries as well as visiting the Pitt-Rivers Museum in Oxford for inspiration.

From fake mermaids to willow patterned plates, the child mummy to gas masks, the strange mix of objects and oddities found in the galleries have resulted in the artists exploring ideas both personal to themselves and universal. Some works have retained a very direct relationship to those in the collection, others have evolved into wider considerations of modern day politics, how we address memory, and our labeling and appropriation of other cultures.

Markmakers hope that this exhibition will encourage you to explore your own ideas inspired by the artworks, and to revisit the museum’s collection with a renewed sense of wonder. 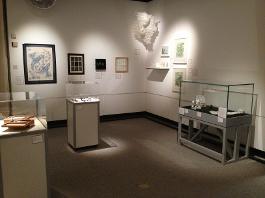 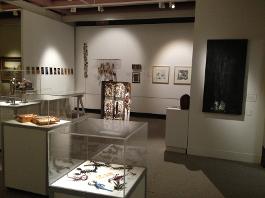 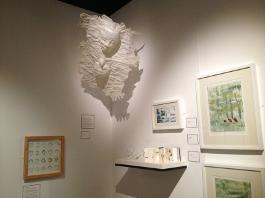 It's all back to front, telling stories with pictures and making sculptures with words, but that is what you'll find in Warrington from May to July as the Halton-based group of artists Markmakers bring their latest exhibition to The Gallery at Bank Quay House on Sankey Street, Warrington.

Over the past two years, artists from Markmakers have been reading and sharing stories, choosing authors and books that interest and inspire them before going back to their studios to create beautiful interpretations of the narratives that they have read. One of the books, Mark Cocker's Crow Country, the opening line from which the exhibition takes its title, features descriptions of nature and the natural environment. It has stimulated artworks and research visits in the landscape of Warrington and the North West, resulting in many of the artists making work featuring Crows and their habitats.

Not all of the artworks use published stories as their reference point, many of the artists have touched on their own personal accounts of life, showing how even the smallest events in our lives have significance and consequences.

Sculptures, painting, drawing, prints and collage all appear in the bright, spacious Gallery at Bank Quay house, which has a reputation for showing the very best examples of creativity from the North West and beyond. These diverse artworks will also be shown alongside a number of artworks that take the form of a book, which visitors will be able to handle, plus a small library of the books that inspired the works will be available for visitors to read whilst they have a cappuccino at the Coffee Shop cafe within the gallery. 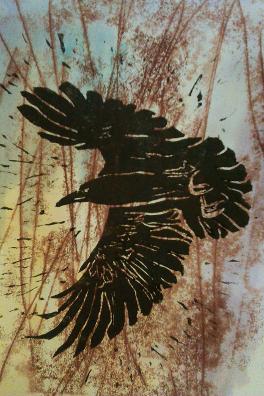 There is something disconcerting about a dead zebra...
The Brindley, Runcorn and Warrington Museum and Art Gallery
2012

Markmakers have been exploring the concept of narratives. Reading and drawing, investigating and creating, members of the group have produced a diverse range of responses exploring story, folklore, personal history and the threads that bring it all together….’

Here we present our responses and ask you to look and contemplate, question and engage with works in relief, print, drawing, animation?, sculpture, installation, textiles and ceramics. This diverse and intriguing exhibition is coupled with many of the narratives and books that were our starting point, left for you to peruse in the gallery to experience the same actions of reading and imagining, as we have done before starting to make our works.

The exhibition title is the opening line from the short story; Farewell, Robert Redford, written by Jamal Mahjoub and published in The Obituary Tango, a selection of writings from the Caine prize for African writing 2006. An intriguing opening line which immediately caught our attention, and we hope yours too. 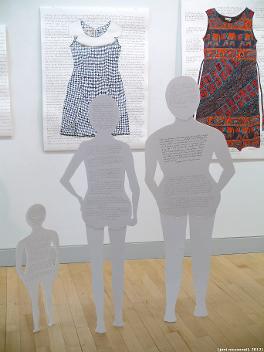 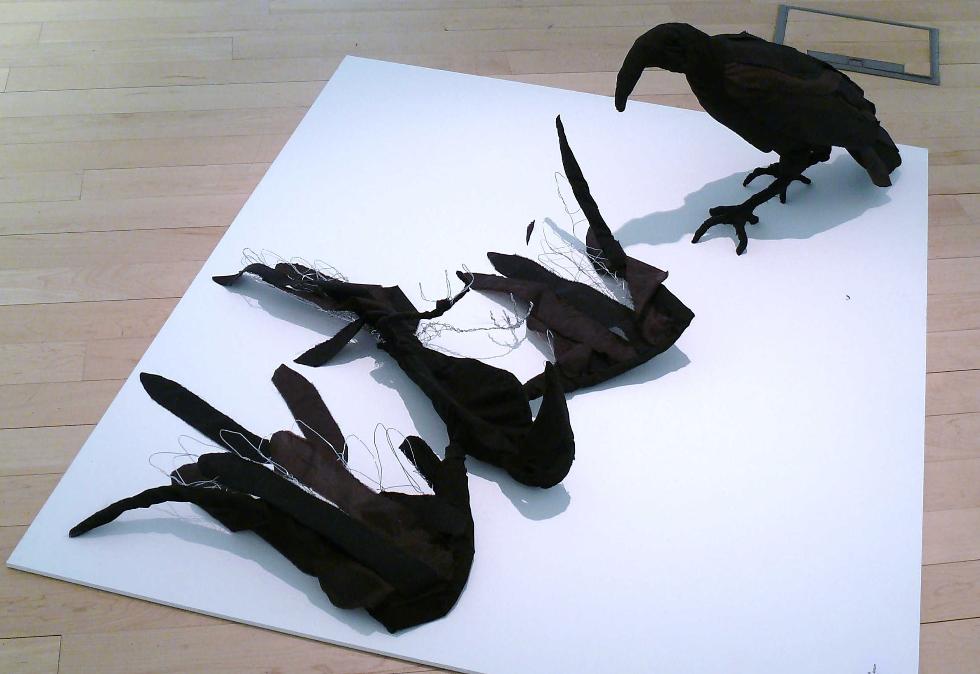 This show was the culmination of two years of research by Markmakers who have all taken inspiration from the River Mersey which flows from the Peak District, through Manchester and out to sea in Liverpool, running through their home borough of Halton. The result is a varied exhibition of sculpture, paintings, photographs, prints and textiles which explores the famous 110km long waterway. Markmakers chose the Mersey as a common theme for their work as it provided a wealth of subject matter from rich wildlife to industrial heritage.

This Tidal exhibition sees a new textile and collage installation by Val Jackson, copper sculptures by Tony Evans and Sue Sharples, a wall painting using mud from the Mersey by Cliff Richards and a host of other works in photography, print, wood, felt and ceramics. Each work has taken its inspiration from the river Mersey in some way, whether from its people and stories, its landscape, the movement of the water or found objects emerging from the river bed. 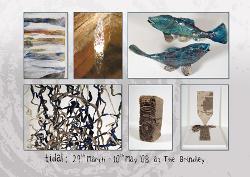 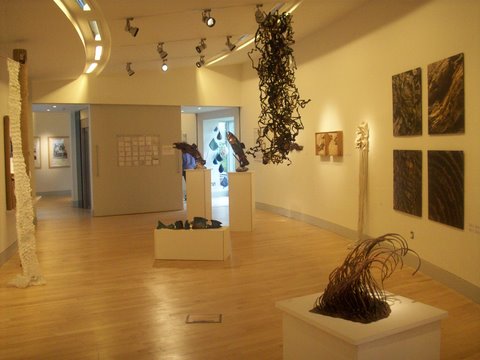